Until last year (2017), while working at Jorge Rigau, FAIA -Arquitectos PSC (jorgerigau.com), I collaborated in the restoration of San José Church in Old San Juan, the second oldest church in the New World. Originally built by the Dominican Order, its construction began in 1532, and spanned until mid-19th Century, with several restoration efforts undertaken during the 20th Century.

As an overseer of the conservation effort under the Patronato de Monumentos de San Juan, I recorded minute details of existing conditions, as well as restoration techniques, and on-site solutions and recommendations.

Customarily, architecture projects rely heavily on construction plans; and while historic preservation endeavors are not exempt of including such drawings, on-site sketches and recording field notes tend to have greater weight. First, because surprises abound; second, since — more often than not — complex tasks need to be translated to workers; and finally, because preservation is mainly about restoring traditions, and on-site instructions — I strongly believe — is one of them.

In this post and a series following, I’ll illustrate how some of those graphic instructions aided at the restoration of myriad elements throughout San José.

While assessing a structural fracture at the Virgen del Rosario Chapel a wall niche or hornacina was discovered behind cement plaster. In what seemed like an attempt to address the structural crack (or change in liturgical aesthetics), the niche had been sealed off from view.

Throughout time, a series of earthquakes affecting Old San Juan had structurally compromised the church and several openings had been repaired. Even if well-intentioned, most too often this repairs where performed with incompatible or feeble means and methods.

Notwithstanding, vestiges of the original niche were still visible under the improvised enclosures. Therefore, we opted for reconstructing the niche, albeit ensuring an appropriate structural reinforcement of the fractured wall above.

The sketch above illustrates our response; restoring the original half-round niche and providing a half-dome to structurally stabilize the damaged lintel, allowing the safe distribution of gravitational forces towards the reinforced brick masonry base.

The photo below shows a bricklayer erecting the masonry base that supported the half-dome. The voids between the brick masonry of the new niche and the uneven surfaces of the rubble masonry wall were carefully filled in with a compatible mortar in order to provide a solid substructure. The subsequent images show the finished hornacina within the space.* 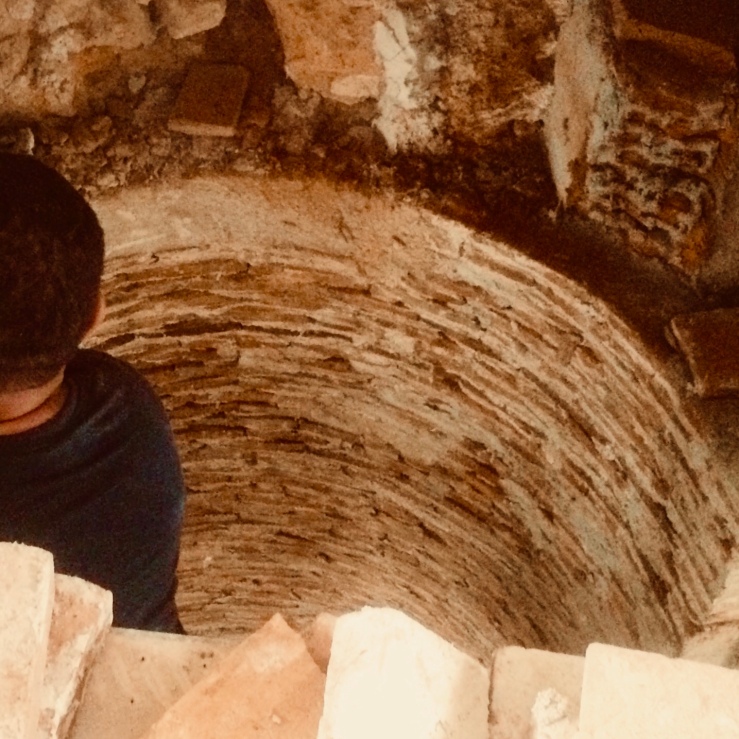 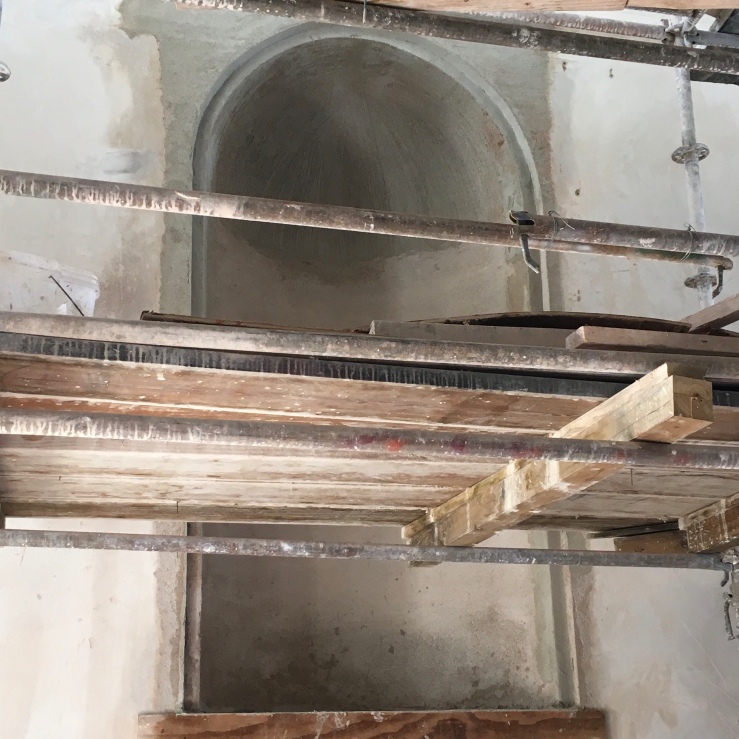 * We decided just to include our sketches, photos of the process and images of the finished product. But in Puerto Rico, for far too long, traditional means and methods of construction like brick, stone or rubble masonry, had been lost. During the mid-20th Century, disguised as a way to withstand hurricanes, traditional construction including wood had been replaced by reinforced concrete (and eventually steel) construction.

Needless to say, throughout the restoration process of San José workers encountered multiple difficulties. Regardless of their avid skills, many initially lacked the discipline to deal with the minute details pertaining traditional construction; careful selection of materials; consistency of mortar mix production; and most importantly, the need for erecting work ensuring geometrical precision in order to withstand the effects of gravity.

Workers quickly learned the fact that masonry construction is not as forgiving (not to say malleable) as reinforced concrete; therefore there were many failed-starts. Fortunately, in all instances, workers’ pride for their craft and perseverance worked in our favor. The finished product not only ended as imagined, but it also performs as intended.